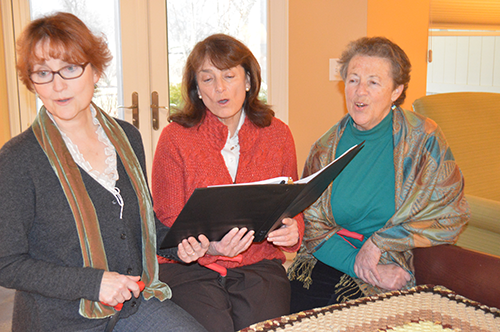 Bettina Gellinek Turner is certain that harmonious voices raised in song can heal the spirit.

Putting her beliefs into practice over the past four years, she has given comfort to the sick, the sad,
the angry and the dying by conducting a small ensemble of Gentle Voices members. (Pictured from left: Bettina Gellinek Turner,
Allyson Lawless and Lorraine Adams sing at Care Dimensions in Danvers).

“I found out that music was the best way to communicate with people at the end of their lives,” Turner said. “Many of the people we sing for are lonely, if not starved for the sound of a gentle voice.”

With courage as her guide and music in her background, she created a local collaborative singing group and aptly named it Gentle Voices. The group has been ministering to the bedsides of people since 2010.

Turner had been singing at bedside for years before Gentle Voices. She holds a degree in music education from Folkwang University of the Arts in Germany, her home country. She also received a certificate in music therapy and media therapy and a master’s degree in expressive therapy from Lesley University.

In the 1990s, Turner worked as a creative arts therapist, making her rounds in nursing homes and hospices as a musical one-woman band, lugging a keyboard, sheet music and a little folding stool.

Her inspiration to go further was a “tiny, birdlike” woman with a musical name: Flora Nightingale was a bedridden woman who communicated with blinks of her “bright blue eyes” and nods of her “white, wisp-covered head.”

On one nursing home visit, Turner discovered that Nightingale was also a German immigrant.

“I decided to sing some German folk songs,” Turner said. “If this tiny, little old lady could have jumped out of bed, she would have. She became completely electrified, her eyes never leaving my face, nodding and blinking to keep going, keep going.”

Today, Turner still totes a small folding stool from room to room, but she has replaced the keyboard with other female voices. The a cappella group sings for free in small ensembles in nursing homes, hospices and homes.

Visits last from five minutes to an hour, depending on the reception the volunteers receive. Part of their contract is to practice and train together weekly, learning repertoire and providing support for their bedside visits.

“We are spiritual caregivers who use music to give comfort,” Turner said. “We try to meet the person in the bed, where they are and what they need.

“On a few privileged occasions, I have been able to accompany someone’s last breath,” Turner said. “I call it midwifery at the end of life.”

Gentle Voices’ mission is not to cheer but rather to connect, promote reminiscing and peace. If the person is sad or angry, the group adjusts its songs to fit. The ensemble has no religious affiliation and represents many faiths, occupations and cultures.

“If someone is very sad, we sing our saddest song,” Turner said. “It is the practice of being entirely present and in the moment with another person. It is ‘be here now,’ the common goal of all meditative practices.”

The ideal number for any bedside is two or three singers. This allows for best harmonies but prevents overwhelming the listener.

“We sit at eye level and close to each other,” Turner said.

They are not there to perform.

“We don’t do a performance,” she said. “We go in and try to use music as a vehicle of connection. People open like a flower, especially dementia patients. Music is transformative.”

One of the singers, Ann Bardeen of West Newbury, said she believes that the power of song lives within our subconscious.

“Songs reside deep in our memories, and hearing them allows us to reach back and access bits of our past,” she said. “Somehow, people whose speech seems to have no meaning will sing along with us, recalling lyrics from decades ago.”

Turner’s singers are from Newburyport, West Newbury, Salisbury and Haverhill. When she began Gentle Voices, she spent 10 months training her singers in the curriculum of death and dying, as well as music repertoire, before making visits.

“We offer practice every Sunday night,” Turner said. “They are not mandatory. Practices are a mix of singing and supporting each other in this work.”

Turner is sensitive to the history that each singer brings with them. Sometimes, events at bedside can be triggers for their own past losses.

Gentle Voices has a standing weekly 90-minute date with the long-term care facility at the Brooksby Village retirement community in Peabody. The singers visit those who can no longer participate in group activities or leave their beds.

“They come to heal the spirit, which needs to be addressed as much as the body,” said Anna Smulowitz Schutz, a chaplain at Brooksby Village. “This is nirvana. It is so mesmerizing that people, whatever they are doing, they stop in their tracks and just listen. We all feel comforted when we hear them sing.”

Kathy Weinstock, a singer from Newburyport, says that many memories have been generated for the singers, as well.

“Memorable moments include being asked by a family to sing at the memorial service for a woman whom we became very friendly with during her decline,” Weinstock said. “She had initially refused to have us sing for her when we first approached her.”

“It’s quite beautiful,” she said. “(All the residents) comment on it. Even the residents down the hall can hear. People are mesmerized. It is a beautiful way to be ushered out of this world.”