Posted on December 7, 2020 by Laura Connolly 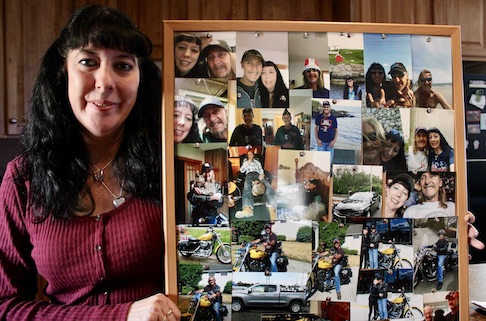 Laura Connolly with photos of her time spent with Scott Sanford

The first time I saw Scott Sanford, we just stood there at the door at work, staring at each other and he smiled at me. I fell in love with him as soon as he did that. He had the most beautiful smile. I knew this was it.

At the Christmas party I wanted to give him a kiss, so I started kissing a couple of the guys so I wouldn’t be obvious – I was the only female in the shop. I smacked him one right on the lips and, believe me, he was suffocated.

We started hanging out together on breaks. One day I was leaning on his car window, talking to him, and I told him I had a dream about him. He laid a kiss on me, and it was no Christmas party peck. I drove home in a daze but with a smile on my face. Butterflies.

We started seeing each other outside of work. People told me, “Scott’s been here for 35 years and we’ve never seen him this happy.”

We moved in together in 2014 and we did everything together. Scott said, “You’re the best thing that’s ever happened to me, Laura. I’ve never been this happy in my life.”

“I never felt the way I feel when I’m with you,” I told him.

In May of 2020, Scott started complaining about a pain in his ribs on his right side, but he was going to let it go, thinking it was muscular. I insisted he go to the doctor, and he had X-rays and bloodwork done. That was a Friday. Monday, I got a call at 7 a.m.: Rush Scott to the nearest hospital. His sodium is so low he could have a heart attack any minute.

I drove him to Beverly Hospital and, because of COVID, I couldn’t be with him. They kept him in the hospital for three days and ran more tests. The doctor told me they found a cancer spot on his lung and it had spread through his body, his bones and his brain, and that it was incurable. The day of that diagnosis was the worst day of my life. I brought him home and I stayed with him.

In late July, the oncologist said chemo wasn’t helping and the cancer was spreading rapidly. He gave Scott four to six months to live. Beverly Hospital arranged for hospice care through Care Dimensions and they helped me right away; they were there for me. Our nurses, Jacob and Luz, were fantastic. Jenne Robertson, our social worker, was amazing. God bless them all.

Everything just happened so fast.

Scott and I had made plans for our wedding on September 27. We had picked out rings together, I bought a wedding dress and Jenne helped me plan our event. Scott said, “I’m going to marry you before I go, Laura.” We all thought he was going to make it to that Sunday. I was so excited and he was so happy.

Early Wednesday morning, Scott’s eyes were open but he was unresponsive. I called his family and Care Dimensions. Chaplain Hilary Davis got here first. She asked if I wanted to read our vows. I read to Scott what I wrote. I was crying so this was really hard to do. Hilary read what Scott wrote. Scott had tears coming down his face.

Then Hilary pronounced us husband and wife and I know Scott heard everything. Five minutes later; he wasn’t breathing. I believe the ceremony gave him some closure, so he let go and he passed away.

Hilary was fantastic. She sang to me in “prayer language,” which was so powerful. It calmed me down. Scott had loved Hilary. Her advice lifted me: “Find people to trust and with whom to share your true self. No one’s pain is exactly the same, but others have experienced pain just as deep, and you will need them just as they need you. You do still belong.”

Hilary also did the sermon for Scott’s wake and spent time alone with me. I’m so grateful for her support and everyone at Care Dimensions – I miss you all.

Scott Sanford was the most amazing man I ever met in my life; he was my soulmate. We had six wonderful years together and I plan to be with Scott in heaven for an eternity.