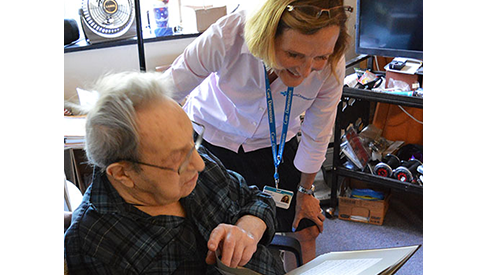 Benedict “Ben” Gesmundo of Haverhill, MA, has never thought of himself as a poet. Although he wrote several hundred poems over 50 years, he rarely shared them. Poetry was an outlet for Ben. When he felt inspired to get his thoughts on paper, they often came out in verse.

Over the years, Ben accumulated mountains of paper where his poems lived. After he was soured on a publishing company’s scheme to extract $50 from him and other aspiring poets just so they could see their work in print, Ben never submitted another poem for publication. His poetry remained virtually unknown except to him and a few family members, and he had no organized collection of it.

A few months after coming onto hospice service with Care Dimensions, Ben began accepting weekly visits from a volunteer named Sue, who offered to assemble his poetry into a book as a legacy project.

The project took several months, as sheets of paper containing the poems were scattered about Ben’s studio apartment and often hidden among books, clothes, and other possessions that filled the room.

“All this stuff just came out of me in moments of inspiration,” Ben said. “I had to capture it or lose it.

“I accumulated poems for years and in no special order,” continued Ben, who lives alone and is approaching his 89th birthday. “It was a monumental task for Sue to go through them all.”

Sue carefully pasted the poems individually onto thick sheets of paper and assembled them into a 12 x 12-inch book with sturdy covers.

“She did a job that I couldn’t do,” said Ben, who uses a walker to maneuver around his tiny apartment. “She did a hell of a job putting it together.”

Deb Todd, the social worker on Ben’s Care Dimensions hospice team, recalled how happy Ben was when Sue presented him with the collection of his poetry. “He said, ‘This is gold!’ He was visibly moved by it.”

The book contains the poem Ben is most proud of, “Ode to the Departed,” which includes the following passage:

Mission accomplished . . . is not to die
but discarding a body no longer useful
and then
Re-entry . . .
returning “home” is to be reborn
in yet another dimension

“I never thought of myself as a poet, but I felt some identity with ‘Ode to the Departed,’ Ben said. “It has meaning. Anyone suffering a loss would feel uplifted by it. It’s sort of inspiring. My brother-in-law’s father had died. I just didn’t feel like a Hallmark card would express my feelings.”

Ben said he is “very gratified” to have the finished collection of his poetry so he can revisit his writings whenever he pleases.

Thanks to his volunteer, Ben’s poems – and memories – that might have been lost have been preserved.

Volunteers are the heart of hospice. Learn about volunteering options and our extensive training.