John “Jack” Forbes, a Quincy resident for 60 years, was a family man with nine kids, 34 grandkids and 22 great-grandchildren who all adored him. He was married for 58 years to his sweetheart, Theresa, until she passed away on hospice care in 2014. He loved being the father of nine kids and treasured his Irish music and step dancing and any activities his children and grandchildren were involved in. He had a significant impact on many people who remember him as their inspirational role model when he was executive director at the Denison House in Dorchester and the East Boston Social Center.

In the fall of 2020, during the COVID-19 pandemic, Jack, 91, was at Massachusetts General Hospital (MGH) being treated for complications from advanced heart and kidney conditions when his family first started talking about bringing their dad home on hospice because further treatment options were limited and would have been too taxing on him.

“As you can imagine, with all his kids weighing in on the discussion, we had some conflict in the family on what approach to take,” John said. “My sister Mary, who is a nurse, looked at four or five different hospice agencies and chose Care Dimensions because she liked what the website had to say. Care Dimensions also was highly recommended by his primary care and heart doctors at MGH.

“When we brought him home in September, we didn’t think my dad was going to make it through the night,” he said. “Two or three days prior he’d basically given up and told us he felt he was being sent home to die.”

Those few days, however, weren’t the measuring stick for the two months that would follow. The weekend he arrived home, he came alive, clearly wanting to live. From that point on, John said, he had eight great weeks and the whole family was able to visit.

“He had a ball, one continuous party – a two-month sendoff, really,” John said. “We all credit Care Dimensions with making that possible. Jill Roberts, his RN case manager, saw my dad two or three times a week. She was so cool and calm and collected and professional. She was so good with my dad; she was tremendous.”

“People stabilize and live longer on hospice than people expect,” Roberts said. “They become more involved with their families. John spent his last two months surrounded by his family. Next to his bed he had a recliner, like his throne, and that’s where he would entertain his audience.”

On McAdams’ first visit she had the honor of presenting a veteran’s freedom stone and stars from an American flag no longer in service to Jack, who had served in the Army during the Korean War. He was a lifetime member of The Disabled American Veterans. On Veterans Day, a Care Dimensions volunteer delivered a red, white and blue afghan to him. “He had the afghan wrapped around him at all times,” McAdams said. “I understand it was passed on to his grandson, James, a recent Marine Corp graduate.”

Jack really connected with his social worker, Kailey Face. “Kailey, like Jack, was a Boston University School of Social Work graduate, who knew exactly how to draw him out,” John said. “They shared stories, like how he met Martin Luther King when they were both students there.”

“The time he spent at home was so meaningful,” Face said. “Even though he was symptomatic near the end, those couple of months for him were really good in terms of quality of life and he was aware and oriented up to the very end. He truly loved engaging with his family. It was special for all of them.”

She recalled how the family dynamic contributed to the great experience for Jack but also gave his children the time they needed to adjust.

“John, in particular, had the space to review his dad’s life,” Face said. “Talking about his dad’s experiences and reflecting was very helpful to him. Jack had a prolific life, was an activist during the civil rights era. His many grandchildren were amazed by the stories he was sharing. He was an impressive person.”

Each member of the hospice team served as a guide for the family about what would come next.

“Our support for the family during his months at home meant a lot of active listening and sharing teaching moments,” McAdams said. “When they told me, ‘He’s sleeping more and eating less,’ I reassured them it sounded like the normal progression. And we’d reaffirm he was very comfortable and at ease.” 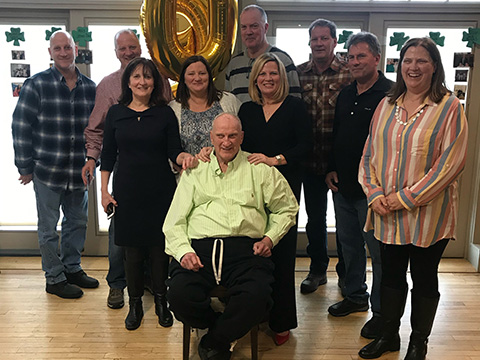 Jack loved living life to the fullest, and hospice gave him eight more great weeks living it with family, the people who mattered the most to him.

“The way my dad was treated was nothing short of spectacular and I don’t really use that word lightly,” John said. “The family saw kindness, dignity and respect from the whole Care Dimensions team. In your life you don’t come across perfection, but Care Dimensions couldn’t have scripted it any better. It was the right people at the right time.”