Care Dimensions: ‘Do Your Job’ Takes on Special Meaning for Ipswich Man

‘Do Your Job’ Takes on Special Meaning for Ipswich Man 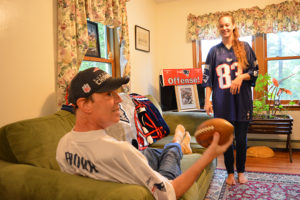 Steve Brown plays catch with daughter Samantha at Steve's home in Ipswich.
For Ipswich native and New England Patriots fan Steve Brown, “Do your job” is more than a popular phrase; it’s a philosophy to which he has subscribed through five bouts of cancer over 32 years.

For his entire adult life, Steve did whatever it took to provide for his family. The adversity started early, but like a true Patriot, he met it head-on every time.

In 1985, when he was just 23, Steve was diagnosed with Hodgkin lymphoma. He and his girlfriend (now wife) Tracy, had a four-year-old son, Chris. For four months, Steve had radiation treatments at Boston hospitals five days per week. The illness forced Steve to ditch his dream of becoming a commercial pilot, but he went to work in the cargo business for several different airlines out of Logan International Airport in Boston. He put the cancer behind him and lived his life “like it never happened.”

In 1992, Tracy gave birth to their daughter, Samantha. Later that year, the Hodgkin lymphoma returned. For six months, Steve had chemotherapy for three consecutive days, and on the fourth day he would go to work. “He worked through that treatment so he could take care of his family,” Tracy recalled proudly.

Steve’s cancer was in remission for several years, but in 2011, the radiation treatments caught up with him and he was diagnosed with esophageal cancer. Doctors told him there was a 15-20 percent chance that he would live three years. He and Tracy found a surgeon at Brigham and Women’s Hospital who would perform a new kind of surgery on Steve – essentially creating a new esophagus for him. 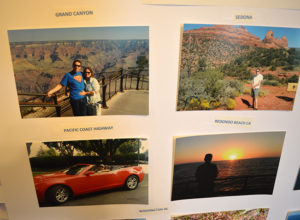 Steve and Tracy Brown decided to "hit the road" as much as possible after Steve was diagnosed with esophageal cancer in 2011. Here are pictures from a few of their trips.
In September 2012, the cancer had returned in one lymph node. His oncologist suggested Steve try a new treatment that was finely targeted on the single diseased lymph node, which kept the cancer at bay for two years.

The cancer returned in 2015, and Steve qualified for an immunotherapy clinical trial for treatment of esophageal cancer. Of the 30 people in his trial group, he went the longest (18 months) before the cancer progressed.

In May of this year, Steve suffered a brain hemorrhage, which caused a stroke that partially paralyzed the left side of his body. He recovered better than expected in a matter of weeks, but he had two additional strokes. There were numerous trips to the emergency room. Steve decided he had had enough of hospitals.

“When you’ve been in hospitals a lot, you lose control of your life,” Steve said. “They make all the decisions for you. That’s my biggest issue. I want to live and die on my own terms.”

Steve and Tracy talked about bringing in hospice, and they consulted Steve’s primary care doctor, who agreed. They called Care Dimensions in August.

“Hospice has given Steve the flexibility to live out his life as normally as possible, despite what’s going on,” said Tracy. Examples include:

“Steve has always lived life on his own terms, and Ana (hospice nurse) and Angie (hospice social worker) are respectful of that and doing things the way he wants,” Tracy added.

Making the most of every day

After Samantha moved to North Carolina to attend college, Steve and Tracy decided to travel as much as possible. “The last six years have been the hardest, but they have been the most fun,” said Steve. They visited national parks, including several in the “Grand Circle” in the southwestern U.S. Other trips included Florida, Puerto Rico, and Highway 101 along the California coast.

Angie asked Tracy if Care Dimensions might be able to help Steve cross anything off his bucket list. Tracy immediately answered, “Tickets to a New England Patriots home game.”

Steve is a life-long Patriots fan and owns a vintage Number 80 - Troy Brown jersey, but he had never seen the Patriots play at Gillette Stadium. 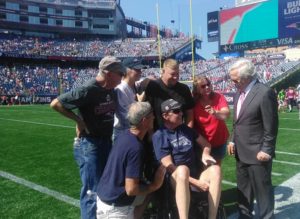 New England Patriots owner Robert Kraft speaks with Steve Brown and family on the sideline at Gillette Stadium prior to the Patriots' game against the Texans on September 24, 2017.
Angie quickly discovered that all Patriots’ home games are sold out, so she put the word out to Care Dimensions staff. Less than a day later, clinical manager Leslie Tkaczek found someone who wanted to anonymously donate six tickets for the September 24th game against the Houston Texans to Steve and his family.

On game day, Steve, Tracy, Samantha, and Chris were joined by Steve’s brother, Phil, and best friend, Paul, to enjoy an unforgettable experience. The Patriots gave Steve and his entourage pregame field passes, which put them on the sidelines during the team’s warm-ups. They even got to meet Patriots Owner Robert Kraft, and Steve was interviewed by WBZ-TV sportscaster Dan Roche.

Steve Brown watches from the sideline as Tom Brady and the New England Patriots take the field in Foxboro, MA on September 24, 2017.
To top it off, Steve’s favorite Patriot, Tom Brady, completed five touchdown passes, including the game winner with just 23 seconds left. He did his job.

After the game, Tracy posted an album of photos from the day to her Facebook page, writing: “Thanks to the generous person who donated the great tickets to today's game, the Care Dimensions staff for working so hard to make sure his wish became a reality, and the Patriots for rolling out the red carpet for my Zorba! What a thrill!”

Now Steve does his job by staying upbeat and enjoying special moments with his family and friends. With the help of hospice, he plans to do that as long as possible.