Care Dimensions: Coming Together for Papa’s Crew, Walk for Hospice

Coming Together for Papa’s Crew, Walk for Hospice

Posted on August 2, 2018 by Maureen Gillis and Amy Emery 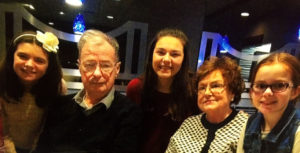 Norman Brown and his wife, Dolores, at a family gathering with great-granddaughters Caitlin (left) and Molly (right), and granddaughter Olivia (center).
Norman Brown of Danvers lived with non-Hodgkin's lymphoma for 18 months and received palliative care from Care Dimensions. At 87, the retired engineer still had a decent quality of life: he continued to drive, wrote for “STOCKS & COMMODITIES”, and enjoyed time with his three grandchildren and two great-grandchildren. He and his wife, Dolores, lived with their daughter, Maureen (Brown) Gillis and her husband, Jack. A few days before the 2016 Walk for Hospice, Norman’s symptoms became too severe for the family to manage. He was at Lahey Hospital when a palliative doctor there recommended he transition from palliative to hospice care. He received hospice care from Care Dimensions at home for several days before he died in October. In Norman’s honor, his family is forming the “Papa’s Crew” team for the Walk for Hospice at St. John’s Preparatory School in Danvers.

Maureen (Brown) Gillis: I insisted my dad get hospice care from Care Dimensions because I knew they had the Kaplan Family Hospice House. When I worked at Danvers Bank, I had helped raise money to build the Kaplan House. I was always in awe of the place. You hope you never need it, but if you do, you’re sure glad it’s there.

Amy (Gillis) Emery: My grandfather was referred to hospice on a Thursday. The next day, I decided I would do the Walk for Hospice, which was coming up that Sunday. Three of my high school friends joined me, and I kept thinking, “I’m going to do this again as part of a team” because I knew he was going to die while on hospice.


“Everything happened the way it was supposed to”

Maureen: My dad received hospice care at home until his pain could no longer be managed there. He was frustrated and uncomfortable. To better control his pain and symptoms, on Monday morning he was transferred to the Kaplan House, where he could receive 24/7 nursing support. He was there only 24 hours, but everything happened the way it was supposed to.

Amy was off that day, so she was able to join me. I was greeted at the front desk by my friend, Diane Brinkley, who volunteers as a receptionist.

Everything about the setting was so peaceful. My dad could see the marsh from his room. It was home-like.

His nurse, Jeannette MacDowell, was a childhood friend of mine. It was so calming for my dad and my mom to see her at the Kaplan House. She ended up working a double shift that day and was there until 11 p.m.

Amy: On our way out, I also got a sign that things were happening as they should when I bumped into a former co-worker of mine who runs a widow’s support group at the Kaplan House. Seeing her there, at that time, told me that we’d be OK.

Maureen: I had trouble sleeping that night, woke up early on Tuesday, and around 7 a.m. got the call that my dad had passed. Jeannette came to meet us at the Kaplan House on her day off. It was comforting to have her there.

Amy: This was the first time that my daughters, Molly and Caitlin, had lost someone close to them. They were only 10 and 12, so they didn’t visit “Papa” at the Kaplan House. My cousins, Olivia and Vanessa, are teenagers, so they did see their grandfather one last time. One of the child life specialists gave me some information about how to talk to my daughters about their great-grandfather’s death. Not only was it helpful for me and them, but I recently passed it along to the mom of one of my elementary students whose father died. So while it’s sad that my grandfather died, I’m glad that I was able to help a family who had suffered a tremendous loss.


Papa’s Crew gears up for the Walk for Hospice 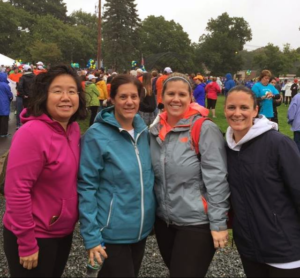 Amy Emery (second from right) is joined by her friends, Laurie LaChapelle, Colleen Napoli, and Sue Hourihan at the 2016 Walk for Hospice to benefit Care Dimensions.
Amy: Now, we’re forming the “Papa’s Crew” team for the Walk for Hospice. My grandfather loved everything about space and science, so we’re kind of like the crew that would staff a spaceship under his command. Caitlin is reaching out to her friends to join our team. She misses Papa a lot and wears a necklace that includes a picture of him with her and her sister. Molly has the same necklace and wears it often. She has been helping me prepare for a giant yard sale we’re having on August 19 to jump-start our team’s fundraising.

We are so grateful that my grandfather was able to be comfortable and die a peaceful death at the Kaplan House. While Papa’s Crew honors my grandfather’s memory, we hope to also raise awareness about Care Dimensions and the need to support its important work in end-of-life care.

Register for or make a donation to the Care Dimensions Walk for Hospice.