Members of Team Boutchie surround "Meme" during the 2008 Walk for Hospice.
I was close to my grandmother, Muriel “Mernie” Boutchie. My brothers, cousins, and I called her Meme. I was the oldest of seven grandchildren, and she was just 40 years old when I was born. Her life centered on family, helping others, and food. Going to her house was always fun, with lots of delicious food.

Meme’s father (our great-grandfather) started The Village Restaurant in Essex, MA, about 60 years ago, and Meme worked there for much of her life. I started there part-time when I was 14, and worked alongside her for 12 years.

Meme taught me the importance of having compassion. If she knew of people who had no place to go for Thanksgiving, she and the family always invited them to the restaurant. She also was committed to helping others – whether it was taking an elderly aunt shopping, watching other people’s children, or whatever was needed.

When Meme was in her late 60s, my wife Sharon and I had purchased a home with an in-law apartment and she moved in. Her husband and her father had passed away in the same week. She felt that downsizing would be good for her and benefit us and our growing family.

In 2008, Meme developed brain cancer, which spread to her stomach and liver. I accompanied her and two other family members on a doctor’s appointment when she was given two choices: undergo chemotherapy and radiation treatments, which would make her very sick for a long time; or begin hospice services, be comfortable, and live out her remaining life doing the things she wanted to do. She chose hospice.

Sharon worked for Care Dimensions (then Hospice of the North Shore) as the president’s assistant, so setting Meme up with hospice care there was a natural fit. It was something we could do for her to make her comfortable. Having the hospice team come into her home took a lot of the stress away from the family as caretakers. They regulated her medicines and provided guidance, which gave us the peace of mind that her care was being handled correctly. It allowed us to focus on having fun and making more memories with Meme.


Making the most of every day

Meme knew a lot of people, so she filled up her calendar with ways of reconnecting with them. She met friends for dinner four to five times a week. She went shopping with friends. She attended my cousin’s wedding. She even went camping at Hampton Beach State Park.

On the morning of the 2008 Walk for Hospice, it was raining. Meme had said she wanted to go, but we figured the bad weather might change her mind. I woke her up and asked if she still wanted to go with us. “Of course,” she said. “It’s a beautiful day!” She was so happy that she was doing what she wanted to do. 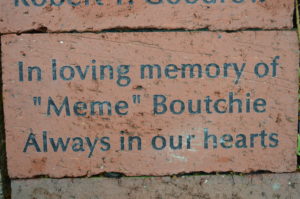 One of two inscribed bricks honoring "Meme" Boutchie in the Garden of Remembrance at the Kaplan Family Hospice House in Danvers, MA
Shortly after the Walk, Meme’s health got significantly worse and she could no longer be cared for at home. She was admitted to the Kaplan Family Hospice House, Room 7. It was not unusual for her to hold court with 15 people in that room. She had that kind of personality. Once again, the care was outstanding and compassionate, which allowed us to focus on enjoying fun moments with her.

Meme died peacefully at the Kaplan House. Although I am saddened by her death, I am grateful that hospice allowed her to live her life as she wanted. I’ve seen the good it can do, and my family and I have been touched by it. I want everybody to be able to live out their remaining time as they wish.

I invite you to join me for the Care Dimensions Walk for Hospice, which raises funds to help ensure that everyone – regardless of ability to pay – has the same option as Meme did.