Care Dimensions: How Hospice Became Personal for Me

How Hospice Became Personal for Me 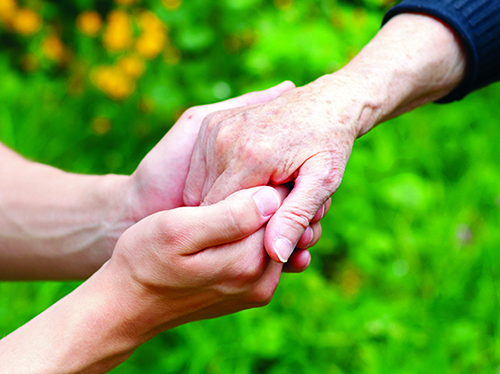 Three years ago this month, I began working in the Marketing Department at Care Dimensions. During the interview process, I recalled to my soon-to-be manager and her supervisor that I wished I had connected with hospice sooner when my dad was dying in a nursing home. Maybe working for a compassionate, nonprofit hospice agency would help me deal with that regret, I thought.

Since joining Care Dimensions, I’ve been reading about serious illness, death, and grief nearly every day because it’s part of my job. I interview families who have had loved ones die while on our hospice care, and write articles about their experience. They’re always so grateful that the people they miss had peaceful deaths with dignity. That makes a good day at work for me.

My friends see me share Care Dimensions’ posts on social media often. Many of them like the posts; some – those who had family members die while on hospice – love those posts. They can relate all too well.

I’ve absorbed a lot of information about end-of-life care, but I’m certainly no expert, especially compared to my amazing co-workers who deliver the care. But some of my friends see me as knowledgeable, and one of them recently came to me for advice about hospice.

“Patty” is someone I’ve known since childhood. We grew up in the same neighborhood where we, our brothers, and other kids would play Wiffle ball and kick-the-can. We spent many Saturday mornings at the local six-lane bowling alley (candlepin, of course), and in the summer rode our bikes a mile to the town pond (without our parents!) where we took swimming lessons.  It was 50 years ago, but the memories of that good, simple life are strong.

Up until a few years ago, Patty and I had lost touch. We reconnected via Facebook, and even better, we spent some time together. Her favorite meeting spot: a restaurant in my town where she would always get the fried clams, preceded by a Captain and Coke. One night, she passed on the drink and told me she was going to Massachusetts General Hospital for treatment soon. She had learned that she had a very small tumor on her liver. She didn’t feel sick. She didn’t look sick. And for the next couple of years, she and her doctors managed her cancer well. She always stayed upbeat.

Fast forward to this past fall. I’m talking to Patty in her living room. She is bald and about 30 pounds lighter. Her clothing size has shrunk from medium to small, and even some of those are too large now. A clinical trial was unsuccessful and the cancer has spread. She and her oncologist are discussing other options. I’m thinking about patients that Atul Gwande described in “Being Mortal” and I want to tell Patty to see a palliative care physician. Instead, we talk about the relationship Patty has with her oncologist. “I can talk to her about anything,” Patty said, adding that she had become very close to her doctor over the past two years.  “That’s good,” I said, “because it’s important that she know what you want, and what you don’t want.”

Early last month, I received a message from Patty saying that she decided to stop chemotherapy because it didn’t appear to be helping and “was only making me sick.” Her nurses suggested she look into hospice, so she said she may want to talk about that with me “sometime.”

Sometime could be too late, I thought, so I called her the next day and gave her the number for the Care Dimensions referral center. “They can send someone out to talk to you about hospice, but you don’t have to make a decision right then,” I told her. “Please consider it.”

I followed up with a phone call the following week. Patty hadn’t called the referral center yet and said she was waiting to schedule a radiology appointment first. She promised me she would call as soon as that was set.

She was going to wait until after Christmas. It would put too much of a damper on everything, she thought. But on Christmas Eve, her best friend and health care agent called Care Dimensions because Patty could barely get herself in and out of bed and was in pain. She was assigned a hospice home care team. I told her she was in good hands.

I hadn’t seen Patty since early November. On the phone, I could hear how labored her breathing was, so I sensed that she had declined. I just didn’t realize how much, until I learned that she was admitted to the Kaplan Family Hospice House less than a week after coming on hospice service.

On New Year’s Eve, I saw Patty at Kaplan. I tried to put on a good face and told her that the team wouId make sure she was comfortable. While I was there, a dose of pain medication kicked in, and Patty said she felt a lot better. Just before I left, she finished a chocolate shake. I told her I loved her. She smiled and said, “I love you, too.”

That was the last time I saw her. She stopped taking visitors (except for family) the next day. I thought about her a lot, and sometimes had difficulty concentrating at work. The following Monday, I texted her health care agent to see if there was any way I could help. She politely declined and said that Patty was sleeping all the time. I knew what that meant.

On Wednesday, I learned that Patty had passed on from this life the previous evening. I’m deeply saddened. I wish she had gone on hospice as soon as she knew that her clinical trial wasn’t successful. Maybe she would have had a few more months with decent quality of life. But I can’t play the “what if” game. At least I know that she was comfortable, getting the best care possible, and showered with love and support at the end of her life. And that’s what I would want, too. Thank you to everyone who made that possible for her.

Anyone can refer a patient for a hospice or palliative care evaluation. You can call Care Dimensions at 888-283-1722, or request services via our online form.