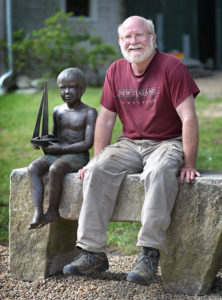 John Seamans with one of his mother's sculptures, which was inspired by a photograph of his father as a young boy. (Bryan Eaton photo)
My mother, Beverly Seamans, was a passionate artist who lived life to the fullest. She was fully committed to whatever she did, whether it was sculpting, staying in shape, or supporting a cause.


Tradition of Giving to Hospice

In 2002, Mom donated one of her bronze sculptures to Hospice of the North Shore’s (now Care Dimensions) Hospice Auction and Regatta. She and my dad believed a person should have control over the final chapter in one’s life and be able to die with dignity. Donating a piece of her work to the auction would be a way to help accomplish that.

Mom continued to donate a sculpture to the auction each year, and several larger pieces were purchased by donors for the Kaplan Family Hospice House for residents and their families to enjoy. I didn’t think about my parents’ connection to hospice often. They were well into their 70s, but continued to enjoy all the activities I was used to seeing them do, like swimming, biking, and kayaking. They weren’t in denial about getting older; they just refused to pay any attention to it.

All of a sudden, when Mom was 83, her body started to fail. When she was at a rehabilitation hospital, she projected out what the remainder of her life would be like. She took charge and made decisions for herself. It was a course she decided to go on, and Care Dimensions was there to complete the journey at the Kaplan Family Hospice House. 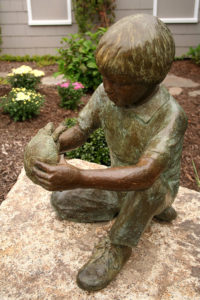 One of several Beverly Seamans' sculptures at the Kaplan Family Hospice House
The Kaplan House staff gave comfort to me and my wife and daughter. I was able to sleep there and be with Mom when she died. I learned that hospice isn’t just focused on the patient but also cares about the folks who are dealing with their loved one’s illness. It’s for the living who carry the torch and it’s a gift of comfort.

Then I got it. I saw why my parents had supported Care Dimensions. I knew that Mom wanted control over the end of her life, and hospice gave her that control and dignity.

I had never attended the Hospice Auction and Regatta until 2013 – eight months after Mom died. Dad was sick, but wanted to attend and to continue Mom’s tradition of donating a sculpture. “That’s what your mother would want,” he told me.

Dad attended in a wheelchair. He was so proud, and it meant so much to him. The audience stood up and applauded him. When it came time to bid on Mom’s sculpture, those folks knocked it out of the ballpark. If Mom only knew what an impact her pieces were having, it would mean so much to her.

The following January, Dad died at home while on hospice service with Care Dimensions. His end-of-life experience was different from Mom’s, in that his decline was longer. Care Dimensions explained to me what “actively dying” is, not to fight it, and to allow the journey to happen.

I was with both Mom and Dad when their pulses stopped. How their lives ended justifies what they believed in hospice and why they supported it.

My mother’s spirit lives in every sculpture she did. Her spirit is in me, which is why it’s an honor for me to continue donating her talent and hard work to the Care Dimensions Hospice Auction and Regatta. I will continue to support the auction until I don’t have any sculptures left, which should be for at least another 15 years. I just know I’m doing exactly what Mom wants me to do. 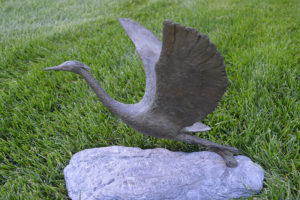 Beverly Seamans' sculpture, Egret in Flight, is up for bid in the Care Dimensions 2016 Hospice Auction and Regatta.
The sculpture I’ve donated to this year’s auction is called “Egret in Flight” and is a wonderful piece. I know there are people who would really enjoy having it and at the same time support hospice. It’s something they’ll have forever.

I am privileged to have the beauty of the pieces to offer. It’s such a small thing for me to do, but I know it has a big effect, and that makes me very happy.

If you would like to express your appreciation for the care provided by Care Dimensions to families and their loved ones, learn about giving options.