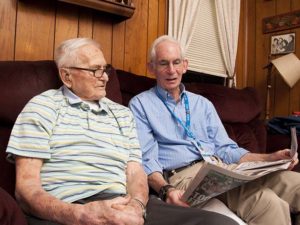 Care Dimensions volunteer Jeff Brand (right), an Air Force veteran from Marblehead, reviews the newspaper sports section with Stanley Lojko, a World War II Army veteran and hospice patient from Salem.
As we observe Veterans Day and thank those who have served in the military, we salute a select group committed to helping their fellow veterans who are facing the biggest battle of their lives.

Members of the Care Dimensions Veteran-to-Veteran Volunteer Program provide companionship and a friendly set of ears for veterans receiving hospice care. They give of themselves, not just out of their sense of duty, but out of respect and admiration.

“It’s a wonderful way to honor the service that these veterans gave for our country, acknowledge what they did, and to share our experiences,” said Jeff Brand, an Air Force veteran from Marblehead who became a Care Dimensions volunteer earlier this year and sees only patients who are veterans.

After leaving the Air Force in 1977, Jeff worked for 40 years in private practice as anesthesiologist at North Shore Medical Center in Salem. Interacting with patients all those years helped prepare him as a hospice volunteer.

“When I took care of patients in my practice, I believed it was important to listen and have compassion,” said Jeff. “There’s a parallel in volunteering with hospice patients.

“When I first meet them, I ask them their branch of service, what they did, and go from there,” Jeff continued. “It’s important to listen to their stories, let them know that I understand what they’re talking about, and that it has value. That shows I respect them.”

Each week, Jeff visits World War II veteran Stanley Lojko at his Salem home. Stanley enlisted in the U.S. Army right after graduating high school in 1941 and served in an anti-aircraft artillery battalion in New Guinea. Soon after meeting, these two veterans discovered they shared an interest in Boston sports.

“I enjoy talking all sports with Jeff, especially football and baseball,” said Stanley, a life-long Boston sports fan who proudly notes he was captain of his high school baseball team. “He’s very nice, and I look forward to his visits.”

“Stan likes company, and I’m more than happy to go over and talk sports or whatever is on his mind,” said Jeff. 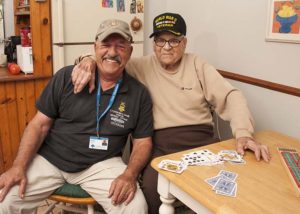 Care Dimensions volunteer Charlie Ciaramitaro, a Vietnam War veteran from Hamilton, plays cribbage each week with Joe Moran, a World War II veteran from Ipswich.
Charlie Ciaramitaro of Hamilton served in the Marine Corps from 1964 to 1967 and was discharged after being wounded in Vietnam. He has been active in numerous veterans’ organizations, including the Disabled American Veterans, American Legion, and the Veterans of Foreign Wars, in which he served as Beverly Post Commander for three years. After seeing how much his wife, Fay, enjoyed being a Care Dimensions hospice volunteer, Charlie joined the Veteran-to-Veteran Volunteer Program about five years ago.

Charlie has volunteered with hospice patients who served in World War II, Korea, and Vietnam.

“A lot of these vets have a story to tell. It doesn’t have to be about combat,” said Charlie. “Especially the World War II vets. Everybody who was willing and able went into the military. They didn’t ask questions. They just did it and when they came home, they went back to work and raised families.

“I really get a lot of satisfaction spending time with them,” Charlie continued. “A lot of times when I visit, I wear a veterans shirt and hat, which they recognize right away. It opens the door to conversation.”

Charlie recalled visiting a WWII Marine who was receiving hospice care at a nursing home. “He fought in the Pacific and landed in Iwo Jima. He truly was a member of the Greatest Generation,” Charlie said. “I used to play Italian music for him on my iPad, and he would rock back and forth to the music. One day, a keyboard player visited down the hall, and he started playing the Marine Corps hymn. My patient perked right up and we went down there to hear that song. We’re two Marines – from WWII and Vietnam – listening to the hymn that united us.”

Currently, Charlie volunteers for Care Dimensions by seeing World War II veteran Joe Moran, who receives hospice care at his Ipswich home. Retired from the Lynn, MA, police department, the 97-year-old is an avid cribbage player who enjoys Charlie’s weekly visits by taking him on in several games.

“Joe is a very interesting guy, and I enjoy hearing his stories and learning more about cribbage,” said Charlie. “He’s really improved my game, and I even won a couple of times recently.”

“I guess I taught him too well,” Joe joked.

Volunteering a few hours a week for veterans who are on hospice is very rewarding, Charlie said. “Sometimes I think I get more out of it than the patient does. It’s a great feeling to know that they appreciate me giving my time. And family members also are grateful because they can go out for a couple of hours while I’m there and not worry about their loved one.”

Jeff Brand echoed that sense of satisfaction and recalled a routine he has with a hospice patient he visits at the Chelsea Soldiers’ Home. “When I’m ready to leave, we shake hands, and I thank him for his service. We both salute each other and he says, ‘Carry on.’ He always asks, ‘When are you coming back?’ It’s a really nice feeling to know that he appreciates my visits.”