Care Dimensions: Hospice Volunteer: The Gift My Patients Give Me

Hospice Volunteer: The Gift My Patients Give Me 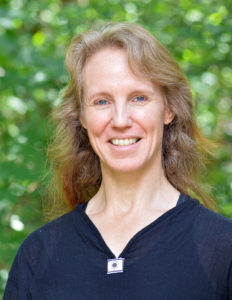 Meghan Gardner, Care Dimensions hospice volunteer
When I tell people that I am a hospice volunteer, they almost always ask, “Why?” They can’t imagine why I would want to be with people who are expected to die soon.

I have a desire to ease people’s suffering, and being a hospice volunteer is a way to make a difference.


Having compassion for hospice patients

Being able to make a connection with someone toward the end of their life can be more powerful than medicine. That ties into my spirituality as a practicing Mahayana Buddhist. A key part of my religion is having and developing compassion.

In the practice of hospice, the truest form of compassion is to be in the space that my patient is in. I let go of me and my needs and what I think is real and I enter their space. I’m participating in their view of what is going on. It’s about being there for them, as defined by them.

One of my former patients was a 97-year-old WWII veteran. I had been with him for seven months. I knew from his family that he didn’t talk about the war, but one day he told me a story about a soldier he knew who did something he believed to be very unethical. Then he asked, “What do you think?” I told him it’s hard to be humane in an inhumane circumstance, and I could never judge what it would be like to be in that soldier’s difficult position. The next week, he retold the story and revealed that the soldier he had been talking about was himself. He trusted me enough to open up. He then unloaded lots of stories about the war – stories that he had never told anyone else. He said, “You’re the only unconditional relationship I’ve ever had.” I felt honored and moved that he could finally tell someone about things that he had been carrying with him.


Being present at end of life

This past spring, I completed vigil training, which is being present with a person who is actively dying. One evening, I got a call requesting that I sit with a patient I had never met before for two hours. I went in at 9 p.m. and while I was there, I learned that the patient’s son, who was traveling from Cuba, wouldn’t be there until 3 a.m.

The patient’s breathing was labored, so I downloaded some songs and streamed “Silent Night” on my phone because I deduced from a small picture of Jesus that she was Christian. When I played the song, the patient turned her head to listen and her breathing became calm. She remained that way as I sat with her until the son arrived. I feel sadness for the son and his loss, but mostly I feel blessed for having had that one moment. Sometimes I don’t get any sign of making a difference during a vigil, but I knew what I was doing that night was important. I’m blessed that I touched one of the two most sacred processes of life… birth and death.


Volunteering for hospice: not about the thank-you

Nine years ago, my father was in hospice care in Saratoga, NY, which is where I grew up. The way the hospice team talked with our family was great because it initiated a conversation that needed to happen. It got everything out in the open so we could talk with our dad and his hospice team about his illness and how he wanted to live. I asked one of the hospice workers, “Why do you do this work?” She told me, “There’s something very special about doing something for someone who never will have the ability to thank you in the end.” That stayed with me. I’m not volunteering for the thank-you. 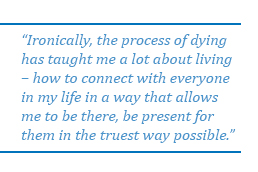 What I get back through volunteering is far more than what I give. Each time I can be there for a hospice patient, I’m essentially practicing for my own death. I do experience sadness when a patient dies, but it teaches me to love and value the relationships I have even more than I already do. Ironically, the process of dying has taught me a lot about living – how to connect with everyone in my life in a way that allows me to be there, be present for them in the truest way possible.

Every day I’m grateful for waking up. I can see in hospice the temporary nature of life. I don’t need to have a traumatic experience to see that. It’s a gift my patients give to me.

There’s no bigger reminder to me of what really matters in life. My patients talk about the people they love, the people who love them, and their regrets. To help them let go of their regrets and be part of a process where they can share deep love for the people around them, and talk about memories of things that moved them in their life – I can’t think of anything more beautiful than those kinds of moments.

VIDEO BONUS: Watch Meghan Gardner explain why she became a hospice volunteer with Care Dimensions and why she feels blessed.