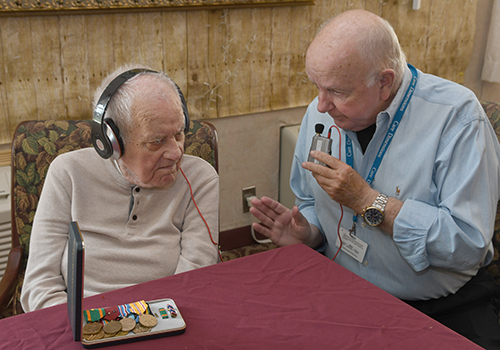 Care Dimensions veteran-to-veteran volunteer Jerry Dunn shares stories with his patient, John Graham, a WWII veteran who wears a hearing amplifier that Jerry bought for him.

Veterans often say their military experience helped them later in civilian life. Care Dimensions volunteer Jerry Dunn of Brookline draws on his experience to relate to veterans who are receiving hospice care.

Jerry served as a petty officer, 2nd class in the U.S. Navy from 1968 to 1972. He spent most of his enlistment in San Diego but also served on the destroyer USS John Paul Jones in the Pacific. Those four years of military service now open doors into the lives of the patients he visits through Care Dimensions’ Veteran-to-Veteran Volunteering Program.

“Whatever service you were in, it’s like a brotherhood,” said Jerry. “When I first meet a patient, I say I’m a Navy vet and visit vets wherever they live. I ask them about their family first, then their service. I focus the discussion on what they like.

“Every patient has a ‘key,’” Jerry continued. “If you can find that key, the door opens and you’re all set. We talk about what they like, and most open up after the first few visits. We develop a friendship. And if I can tap into memories from long ago – like World War II or Korea – they really tend to open up. Sometimes they share stories about their military service that they’ve never told their family.”

Jerry became a Care Dimensions hospice volunteer in 2011 and was influenced by the help he received from friends and neighbors when his wife died from a serious illness at 52. “I had three kids, and if I didn’t have anyone to help me, I would have had a very difficult time,” said Jerry, who spends about six hours a week with veterans who are nearing the end of their lives.

Developing a rapport with a patient is different with each individual. Most times Jerry and the veteran get along well right away. Others take a little more time to warm up to him, but that doesn’t deter Jerry. One example is 99-year-old John Graham who was Master Chief of the Navy before retiring in the early 1970s. Jerry sees John weekly at his long-term care facility in Chestnut Hill.

“When I first started visiting John, he couldn’t hear me,” Jerry recalled. “He’d give me about five minutes, then dismiss me. I had seen a hearing amplifier at another facility, so I bought one for John. He started using it, and we swapped Navy stories. The stories got longer, and so did my visits.”

“We have a lot to talk about,” said John, who was a tail gunner in WWII. “There are a lot of stories to tell – some good, and some bad.” He has shared harrowing stories with Jerry about engaging in combat, but also told him about finding lost children while on shore patrol in Alaska.

Jerry recalled a visit with a Marine WWII veteran who previously hadn’t revealed much about his time in service. “He was rocking back and forth in bed. He kept saying that he was going back to combat, and he was visibly upset. I told him that the company had taken a vote and he was going to remain on a destroyer that night. It made all the difference to him. He calmed down. Later, he talked to me more about his family and his time in the Marines at Guadalcanal during the war.”

Jerry said making a connection like that is “what I’m going in to do. If I can make them feel good, it’s like winning a game or hitting a grand slam. Any time I can help a veteran, then that’s the brotherhood at its very best. I love doing it. Also, I work with chaplains, nurses, and volunteer coordinators from Care Dimensions. It’s awesome teamwork – something that everyone who has ever served in the military is taught.”

About the author
Lisa Conti is Senior Marketing Communications Specialist for Care Dimensions and manages its Voices of Care blog.