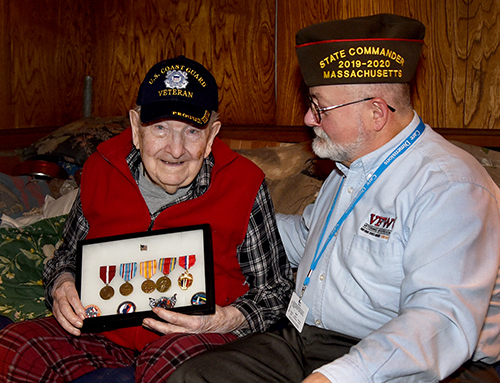 Jeff Najarian completed his enlistment with the U.S. Army and came home from Vietnam nearly 50 years ago, but he’s still serving – not on active duty, but as a volunteer to fellow veterans who need help.

In addition to helping veterans in his hometown of Rockland and remaining active in the VFW for 46 years, Jeff spends time with a 100-year-old World War II veteran who receives hospice at home from Care Dimensions.

The veteran-to-veteran hospice volunteer arrangement has helped fulfill Jeff’s intense desire to serve veterans and has lifted his patient’s spirits. Jeff says it’s all part of a commitment to service.

“All veterans took an oath to defend the Constitution and to serve,” notes Jeff, who rose through the VFW ranks as Post Commander, District Commander, and finally as State Commander in Massachusetts. “I believe most of them are still serving. They took an oath and still live by it even when their service is over.”

An introduction to Care Dimensions

In 2019, Jeff was invited to and attended Care Dimensions’ We Honor Veterans luncheon as VFW State Commander.

“I didn’t know anything about Care Dimensions, but I was fortunate to attend the event and impressed by the volunteer work honorees did for veterans,” Jeff recalls. “I felt good about the dedication of these volunteers.”

After his commitment to the statewide VFW organization ended in 2021, Jeff looked for other volunteer opportunities. He found an agenda he had saved from the Care Dimensions luncheon, and he called to learn how he could volunteer with hospice patients who are military veterans. After completing the volunteer training, he was assigned his first (and current) patient, Marvin Spitzer, who is 100 years old and served in the Coast Guard for four years during WWII.

Marvin began hospice at his Somerville home in late August 2021 but was not always cooperative with the clinical team. Sometimes he resisted help, which is not uncommon among military veterans.

When Jeff arrived for his first visit with Marvin in September, he wanted to start a conversation.

“I went there and started talking with him,” Jeff recalls. “He and his wife Eva were very gracious. We talked for over an hour and I asked if he wanted me to come back in a week. He told me to come by anytime, and I’ve been seeing him every Wednesday since then. We always seem to find something to talk about, and sometimes it sparks a memory. He has some great stories.”

"It's nice for him to come and talk to me,” says Marvin. “We talk about World War II and how I traveled around the world on a Coast Guard cargo ship that delivered ammunition to bases in the Pacific." 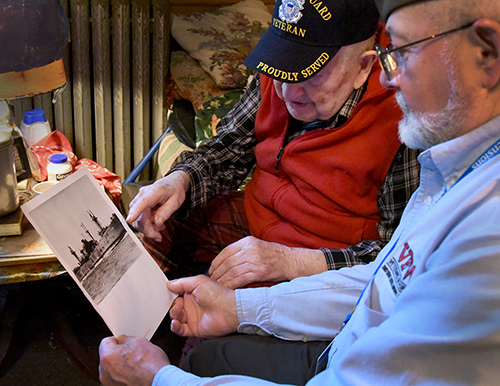 Jeff showed up at one visit with a new Coast Guard hat for Marvin and continued talking with him about his military service. “He couldn’t remember the name of his ship,” Jeff says. “He retrieved his walker and while I accompanied him from one room to another, we passed a coat rack that had a jacket with a Coast Guard logo. It also had a ship’s name on it - USS Murzim, AK-95. ‘Was this your ship?’ I asked. It sparked a memory in Marvin, so I did some research online. I downloaded a nice picture of his ship, plus three photos of crew members who served on it during WWII. I brought the photos to my next visit and Marvin’s daughter Patricia brought a magnifying glass to see if we could find Marvin in any of the pictures. Although we couldn’t determine if he was in the photos, Marvin was excited to see them, and it generated a good discussion.”

Marvin’s hospice nurse, Erin Hougasian, also saw him that day and noticed a big change in her patient.

“Seeing Marvin during that visit was like meeting a new person,” recalls Erin. “He was glowing from Jeff’s visit. He suddenly became more open to the hospice team and agreed to visits from a hospice aide for personal care. Patricia told me her dad is just ‘happier’ and credits our hospice team for that, but Jeff was the catalyst to Marvin’s complete change in attitude. I am so grateful these two got together. I have seen the strong connection Jeff has formed with Marvin and his family. I couldn’t thank him enough for what he has done for Marvin’s morale and for his own service to our country.”

“Since Jeff has been visiting each week, Dad is more alert and looks forward to seeing him,” says daughter Patricia Durgin. “He's in his glory when people visit. He likes to tell stories. And Jeff is very patient. He's interested in what Dad has to say and engages him in conversation.”

“Marvin is much more open with me than he was when I started volunteering with him,” says Jeff, noting that their talks now cover other parts of Marvin’s life, including the 40 years he worked as a caretaker at the Charlestown Navy Yard, where war ships were docked years ago and where the USS Constitution remains. Marvin has shared memories with Jeff about being on “Old Ironsides” as part of his job.

“I believe fully in helping veterans,” continues Jeff, who also drives veterans to doctors’ appointments and created a veterans’ “buddy check” system during the early days of the COVID-19 pandemic. “Veterans helping veterans. If not us, then who? And we do this because we can and must.”

Learn about volunteering with Care Dimensions.