Taking a Walk That Matters for High School Classmate

When we were seniors at Swampscott High School in 1985, my friends Debbie Sentner, Kristin Kennedy, and I were practically inseparable. We loved hanging out – usually at Debbie’s house, laughing at her jokes and eating whatever food her mom had in the kitchen. We listened to Madonna, Prince, and Debbie’s favorite, the B-52s. Like most girls in their late teens, we were rockin’ big hair, which we had appropriately styled when the three of us attended our senior prom together. 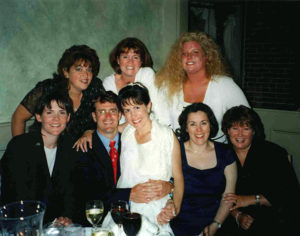 Kate Costin (front row, far right) and several Swampscott High School classmates, including Debbie Sentner (top row, right), celebrate Billy and Kelly Whalen’s wedding in 2001.
Fast forward to December 2017. I received a text message that Debbie (now married, as Debbie Sentner Cuneo) had passed from colon cancer at the Kaplan Family Hospice House. She was just 50 years old. I stared at the message and wondered how this was possible and where the years went.

Like many people, Debbie and I had lost touch with each other for no reason other than life is busy. We had fun at a classmate’s wedding in 2001, but slipped apart again until 2006, which was the last time I saw her. You always think you eventually will see someone and reconnect. Unfortunately, sometimes you can't.

This spring, a Care Dimensions Walk for Hospice email landed in my inbox. I had done the Walk several years ago in memory of my sister-in-law’s aunt. I remembered it was such a good walk – the people were friendly, and it was for a great cause. It got me thinking about Debbie.

I wanted to remember my friend and do something positive in her memory, so I thought, “What better way than the Walk for Hospice?” It would be nice if I could get some of our classmates together to raise money for hospice patients and their families in Debbie’s memory. I reached out to Kristin and four other classmates, and they all said yes without hesitation. So with Debbie's family's blessing, the team SHS Class of 85 was created.

Then we thought, “Why not open this up to our entire class?” It would be a great event to do as a class reunion in sneakers – walking for a great cause in memory of a friend and classmate. With the help of a few friends, I have invited the Swampscott High School Class of 1985 to walk and to donate, and the generosity has been overwhelming.

So far, we have seven classmates on our team, another five from the SHS Class of 1984, plus several of Debbie’s friends who were referred to me by her family. Many others have donated to our team, and we already surpassed our fundraising goal of $5,000! It speaks to the type of person Debbie was. She was so well liked by different groups in our class. Debbie was a larger-than-life person, with the best sense of humor. She could always make you smile and laugh out loud long before we ever heard of "LOL." She also was a giving and caring person, and worked for 19 years as a registered nurse at Salem Hospital.

When I learned that Debbie had received hospice from Care Dimensions, I knew that she had been well taken care of during that final chapter of her life because I had just traveled the hospice journey with my dad.

He had been in declining health and was in a lot of pain. A former police officer and Marine, my dad had firmly established himself as a tough guy in his 82 years, but the pain was affecting his quality of life. A friend of mine who is a nurse suggested hospice from Care Dimensions. I had thought that hospice was only for cancer patients, but I quickly learned otherwise.

The day after Christmas 2017, I made the toughest call of my life to Care Dimensions. An admissions nurse came to my parents’ house that afternoon, met with us, and explained how an entire care team would be available to help Dad and our family. I had spoken to Dad about what he wanted – to be comfortable at home with his family. That’s exactly what hospice allowed him to do.

Every member of the care team was so professional and courteous. Here we were at our worst time and they made everything easier. They really are like angels. They strongly believe in what they are doing, and that kind of rubbed off on me. I gained confidence in my ability to care for my dad and knew that I would do what I had to do. I was with him when he took his last breath. It was peaceful and he died the way he wanted. 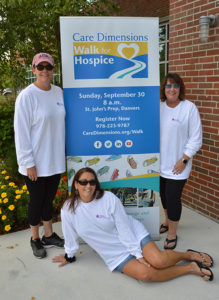 Kristin (Kennedy) Geraghty, Jen (Lena) Venuti, and Kate Costin of the Swampscott High School Class of 1985 are supporting the Care Dimensions Walk for Hospice in memory of their classmate, Debbie (Sentner) Cuneo.
I am a cancer survivor and lucky to be here. I also know how important hospice care is for patients and their families. So do two of my high school friends who are joining me at the Care Dimensions Walk for Hospice:

Kristin (Kennedy) Geraghty’s dad received hospice from Care Dimensions before passing away from cancer in 2000. Her brother, Tommy, had Alzheimer’s disease and passed at the Kaplan House in January 2017.
Jen (Lena) Venuti visited her father-in-law at the Kaplan Family Hospice House before he passed away in April 2016. Jen said the hospice house was a comfortable and peaceful setting that gave the family a place to be together and grieve.

We’re pleased that Debbie’s brother, Peter, and his wife, Nette, are planning to travel from their North Carolina home to join us at the Walk, and that Debbie’s parents, Tom and Holly, will be there to cheer us on.

So on September 30, we are taking a walk that matters as we remember Debbie and our loved ones who have been helped by Care Dimensions. It feels good knowing the money we raise will help hundreds of patients and families who rely on Care Dimensions every day for their compassionate expertise.

I hope you will join us at the Walk for Hospice or make a donation.